The truth is that we’re all different as writers. We need different things in order to write a story, and there is absolutely no need to excuse your method. What works, works. That’s it.

The only time to consider “the other side” is when your method isn’t working. Not only are we different as people, but every story is different. Maybe your last one worked great with a complete pre-planned outline, but this time it doesn’t.

I used to pants my stories, and got nowhere. Started to plan and felt boxed in, but I forced myself to plot. Despite the headaches and frustration over getting a plot together, looking into different kinds of plot structures made me understand how a story is built.

After that I could go back to more of a pantsing-style, becoming the plantser/plottser-type, and created my own method that suited me most of the time. I’m currently working on a mystery novel and had to do some pre-writing, which I don’t do that often. But it worked great for that genre and I don’t think I could have written it otherwise. So if it works, it works. If it doesn’t, maybe it’s time to try something new. The only goal is to get that story down. 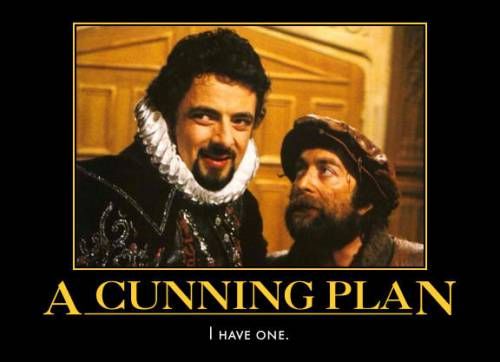 For anyone who want to try planning I have a few links:

The Snowflake Method – Some writers really like this method for planning their book.

The Hollywood Formula – For scripts, but can be used for novels too. Check it out at TV Tropes

Dan Wells’ Story Structure – A series of Youtube-videos by writer Dan Wells of Writing Excuses Podcast (which is also a great resource for writers. None of the rambling, just advice for aspiring writers.)

Just remember that the structures/formulas are only tools, there to tweak and use as you want. They have only one goal: to help the writer, not to put them in a story prison. Use it for diagnosing your plot, but don’t feel your story needs to fit the template perfectly.

I’m not done yet. Some unsolicited advice for beginners who are planning (or not planning) their first novel:

Don’t be afraid to start small. A story has a tendency to grow, and getting tangled up in too many threads early on can be a great way to kill motivation.

So: Don’t write “Infinity War” for your first story. Start with an origin stories instead. Unless you’re really determined. You do you. 🙂

A story changes: I bet even some die-hard planners have moments where better ideas come along while writing, and they change stuff. That’s okay. The goal is to make a story better. It takes some work, and it doesn’t always go to plan. Don’t get upset if your story starts to change. If it feels good, and you see possibilities in that new idea, try it out. All words are valuable, and there are lessons to be learned here as a beginner.

Keep to your character: Their choices, personalities and life situation influence the plot. They create problems, solve them, regret them, lose friends and learn things. Let them start off the plot by making a decision, and then just keep going. Have them deal with the consequences of their decisions, and put up obstacles in their way.

Try to find an ending early: It doesn’t have to be more complicated than “happy” or “sad”. If it’s a happy ending, they will have stuff at the end that they didn’t have in the beginning. (Hint: It’s not always what they “want”, but always what they “need”.)

So, your ending often informs your beginning, and vice versa, and a character arc/plot that’s going somewhere is always easier to write.

Try stuff: This is a time for exploring and learning. A beginner is not only learning the craft, but they’re also learning about themselves as writers. Knowing your writing self will help you evaluate advice and find methods that will suit you. But on the road there, you will hit some duds and need to try something new. That’s okay.

End of advice for now. Take it, ignore it. Advice is always only one person’s opinion and they’re mostly advocating stuff that worked for them. They’re not rules. There are no rules. As long as the story gets written, who cares if it was from pantsing or plotting or plantsing? 🙂

I’m probably writing about witches at this very moment. Or brewing some sinister potion… Most likely coffee.

Glad you stopped by! :) /Carry

A year of living without in America's National Parks

Fooling with words since 2009

Random Musings of a Would-Be Writer